You can’t really succeed with a novel anyway; they’re too big. It’s like city planning. You can’t plan a perfect city because there’s too much going on that you can’t take into account. You can, however, write a perfect sentence now and then. I have.
—Gore Vidal

One twilight in the early 2000’s I sped from work to Bunker Hill in downtown Los Angeles, making it just in time for a friend’s poetry reading. Entering the slightly posh conference room, I was immediately struck by the view from tall windows—rainclouds (anomalies in my part of the world) puffed around skyscrapers with greenish tints, giving the city an Oz-like hue. Slipping behind the crowd, I found a free chair by the raw food bar and sat there for the next hour as my friend and two others read from their new works. For my friend, it was a reading celebrating his first book of poetry published in America–beyond exciting for him. When the reading was over, my friend was mobbed. I dallied by the food, hearing voices I recognized from NPR/KCRW radio shows, listening to authors congratulate each other and namedrop away as they sipped wine from plastic cups or filled plates with raw vegan wraps. I kept my eye on my friend, waiting for my opportunity to congratulate him. One of the radio voices refused to stop flirting with me, and since I wasn’t a fan of his show—a good show, I just didn’t like how he never let his guests finish their sentences—I pushed politely through the crowd until I was at my friend’s elbow. His smile was alive. He was feeling the love (rightly so) and enjoying the praise and compliments. I gave him a huge hug and told him how proud I was of him. He held me at arm’s length and said, eyes shining, voice edged in disbelief, “Gore Vidal is here! Gore Vidal heard me read! Gore Vidal wants to meet me!” And he indicated an elderly man in a wheelchair surrounded by admirers. “Go,” I told him. “Go now!” “Want to come with me?” I shook my head. “Oh my God, go!” And before the crowd closed around them, I watched him clasp hands with The Vidal. I left the building, annoyed with myself for not recogizing one of America’s greatest writers the second I entered that room. Sitting in the last residue of rush hour traffic, I went from annoyed to furious I hadn’t stayed to actually meet one of America’s greatest writers.

But I wanted to get home to my little place in the hills of Echo Park and the soothing writing view from my windows—Los Angeles, spreading from my hood to Venice Beach, twinkling inspiringly. I was in the middle of writing a novel. I was in the middle of a strangely prolific period I wanted to honor. I craved food that wasn’t raw and a glass of decent wine in a real glass. I needed to be at my computer, working, listening to the rain wash my dusty city. 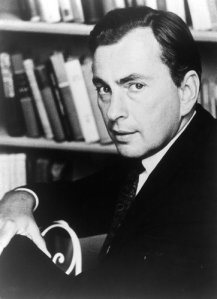 “Style is knowing who you are, what you want to say, and not giving a damn.”

Around 3 a.m. I woke up in a panic and called my future husband. “WTF! I COULD HAVE MET GORE VIDAL!”

5 Responses to Quote For The Weekend (Gore Vidal Edition)