I received an email late yesterday afternoon from my son’s summer camp with this subject line: FRIDAY SPORTS DAY. Meaning, send him to camp in a jersey emblazoned in a sports decal.

An easy one! My boy dressed in his Luke Skywalker 1/2 robe w/belt, Star Wars T-shirt and shorts, down the sides of which he slid his light sabers, various Star Wars action figures filled his pockets and he had a storm trooper helmet under his arm, “Just in case, Mom!”

My son doesn’t have a favorite sports team. He refuses organized soccer. He tried fencing, but the instructor shouted: THIS IS NOT STAR WARS! and he never wanted to go back. He did karate from ages 4 to 8. He’s done with karate. Or is at the very least on hiatus. He could care less about baseball, or (I breathe a sigh of relief) football. He and his hockey-manic dad attend L.A. Kings games, but our son doesn’t want to actually play hockey (his dad breathes a sigh of relief, having played for decades–cue lingering injuries).

“Do you want to wear a team shirt on Friday?” I asked my nine-year-old. He stared at me like I was cray-cray. “Of course, mom!” he said.

“Huh,” I said, wracking my brain. “Lakers?” “Sure! I like those yellow Laker shirts,” he said, surprising me. “Get me one of those?” he asked. “If you clean your room,” I responded, trying to buy time.

Did he really NOT have a team???

We rooted for the Patriots in the Super Bowl, but my son never mentions (unlike his dad on a daily basis) Tom Brady or Edelman. He doesn’t mention the Kings. He’s never seen a Laker’s game, on TV or live. I was so confused. So when his dad got home from work I raced to Target, even though my husband insisted his Patriots shirts would fit our son (he cray-crayier than me). Target had no team shirts in my kid’s size, except for the Golden State Warriors (who???), but I did find a shirt depicting a storm trooper basically going-for-the-gold.

I almost bought it.

This morning? I wish I had. 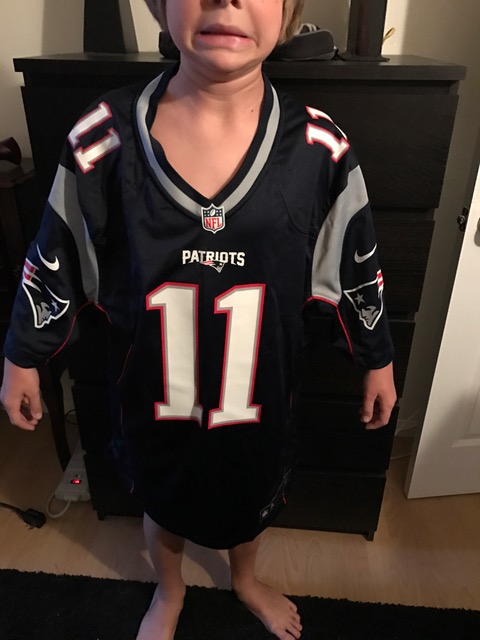