The Wild Kratts are based in Canada. In addition to their TV shows, which are broadcast all over the world, they occasionally venture over the border–mostly into eastern states and the mid-west–to entertain select child-filled crowds with their live show. The energetic brothers have educated my son on animals and fostered his empathy for wild kritters, even rattlesnakes, since he was 4 years old. My son regularly lectures his parents on facts pertaining to animals we didn’t even know existed on our planet, but do now, like the pangolin, or that desert lizard with spines on its back that act like straws, enabling it to suck up rain drops. Yeah! That lizard. Whatever it’s called. 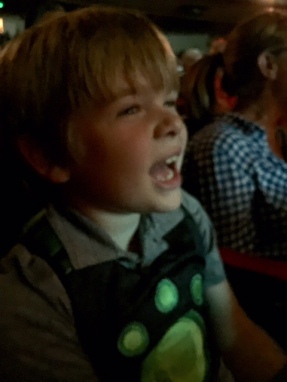 Imagine my excitement when I discovered the Wild Kratts were bringing their show to California. Fresno, actually, located 3 and 1/2 hours from Los Angeles. A limited number of VIP meet and greet tickets were available. Last April, I whipped out my debit card with screams and snagged 3 VIP tix. Through Travelocity I booked us into a Radisson only .04 miles from the show’s venue. And, finally, after the end of 2nd grade, a summer adventure in Hawaii, the start of 3rd grade, the return of homework schedules and moving up a belt in karate, September arrived. We yanked our son out of school for an overnight and zoomed to downtown Fresno. Or, as my husband refers to that city: Fres-yes? Fres-NO!

Between Los Angeles and Fresno the land is pancake. Dirt devils are common and dust hangs in the sky like amber scrim. When we passed the cattle slaughtering plant, I averted my eyes and mentally sent waves of love to the doomed cows. I thought of the TV clips I’ve seen of the Wild Kratts  exploring their wildly pristine, uber-green Canadian environs. As the California countryside around us worsened due to the effects of our lingering drought and we passed abandoned/burnt out barns and crops of weeds, I wondered: Dudes–why Fresno? And, as the temperature climbed: Fres-NO! My husband grumbled. Fres-NO. Are we there yet? asked my son.

Downtown Fresno is in the process of rejuvenating/gentrifying: it’s a wreck. The buildings resemble the historic (beautifully restored) office buildings in downtown Los Angeles, somewhere around Grand and Flower Streets-ish. Tall, cornice-laden structures in desperate need of facelifts and a scrub from an industrial washcloth and environmentally approved perches for the millions of pigeons obscuring the sky.

We navigated one-way streets to the Radisson, situated across the street from a park that should be pretty, but is ringed in chainlink fencing and cement blockades. The driveway for the Radisson parallels its lobby entrance, startlingly brief before dropping into the bowels of the underground parking lot. I squeezed the minivan to the side of the driveway and panicked because I could not find my Travelocity printout with the reservation  confirmation number. I was positive I had packed it in my purse. It IS the Radisson, right? my husband asked. Oh my god, I screamed. Can we go in now? asked my son.

At the front desk, a clerk frowned at his computer and told the clerk next to him to help me and promptly disappeared through mysterious doors and I was so anxious my son have time before the show to swim in the hotel pool (whatever hotel we were booked into) I didn’t complain or take offense, but politely waited my turn instead of causing a scene that might get me thrown out of the joint. When the second clerk finally punched my name into the computer, he came up with: nothing.

I stared at him, oddly screamless, feeling my plans go to Hell. The clerk looked alarmed and said hastily: Let me just check tomorrow’s reservations. And there we were. I had booked us in a day late. You, the clerk told me, need to call Travelocity. 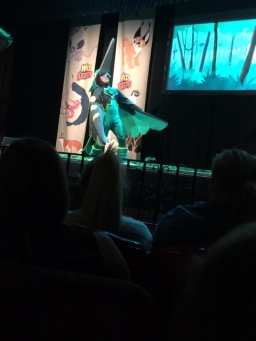 I fell to a lobby armchair and did so, gushing my sad tale to the person on the other end of the line, until, glancing up, I saw the desk clerk waving at me and pointing at his phone. I was talking to him. NOT Travelocity.

I called Travelocity for real this time and the woman put me on hold while she called my desk clerk. I hurried to the front desk and stood before my clerk, listening anxiously as he spoke to the woman with whom I was on hold. She put the clerk on hold, confirmed everything with me, put me on hold and reconfirmed with the clerk, hung up with him, then returned and concluded with me and then it was done. I had our keys, we were IN. I reported back to my husband. It was his turn to stare dumbly.

THIS IS THE BEST ROOM EVER! my son exclaimed. As my husband and I struggled to get the brass cart in the room, our boy whisked back the curtains. OH MY GOD! MOM–DAD–WE HAVE A BEAUTIFUL VIEW!

“No Parking. This area is NOT for the PAWN SHOP.” Fresno!

We made it to the pool. 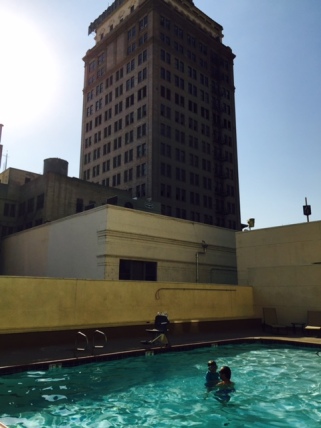 We hit the Radisson’s restaurant when we were all cleaned up. 40 minutes later we paid the bill having waited that long for my son’s meal,

a slice of pizza, which the waitress said she wouldn’t charge us for as the dough was clearly not cooked properly, covered in cold Ragu, 2 slices of pepperoni tossed on top. Raw pizza–because they were out of regular cheese pizza, so they handmade one, which they never do. Fres-WTF, my husband muttered to me. We zoomed to the theatre and I stood at will call with the mob of parents and uber-excited kids, expecting the worst as I couldn’t find the ticket order confirmation number I was sure I had packed in my purse before leaving Los Angeles. Fres-NO, my husband said pleadingly, but a miracle happened, they had our tickets and we dashed inside to buy our son a hot dog to make up for the pizza, but alas the theatre had sold out of hot dogs and workers were desperately making more popcorn for the mob. The lights flashed. We raced to our seats, food-less. My son didn’t seem to notice he was hungry, or that the theatre was stifling and that the Wild Kratts sweated buckets and worked very, very hard that night due to a few technical problems. But the show was solid and my son and every child p 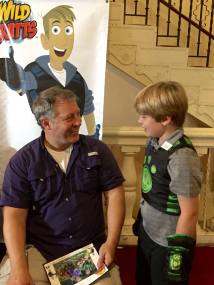 acking that theatre was engaged, screaming answers to animal questions, ‘helping’ the brothers solve mysteries in their interactive presentation. I turned to my husband and said: Fres-yes. And we gazed at the joy emanating from our son. We waited for a while in a stifling hallway to meet the brothers, but my son didn’t care. The brothers were so generous with their time–they engaged with our son, both of them listened to his excited tale about the rattlesnake he saw recently on a hike with his parents. The Kratts must have been exhausted after their show, but they hung in and gave us VIPer’s their all. Best night ever, Mom and Dad! our son told us. So we took him to McDonald’s because that’s all Fresno has to offer after 10pm. It was his first trip there–in all of his 8 years. He enjoyed the action toy, but I was (slightly) regretting brainwashing him about the quality of McD’s chicken nuggets. Please–just eat one nugget, I begged. In the morning, after a huge breakfast, we headed for home.  Throughout the drive our son thanked us for taking him to see his heroes. My husband and I glanced at each other. Fres-m’okay, we agreed, knowing we’d do it all again.

NOTE: The Wild Kratts added shows in Santa Barbara and Costa Mesa after I purchased the Fresno tickets, but those shows didn’t seem to offer meet and greets. So I kept Fresno. If I’m wrong about the meet and greets, don’t tell me and definitely don’t tell my husband. Fres-‘kay?