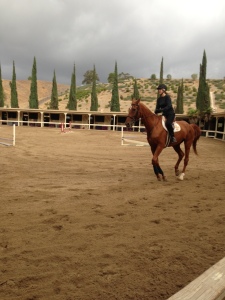 Leapt down the vastly spaced steps to the stalls, rounded the corner, Indy saddled up and ready to go, I talked to him, rubbed his cheek as I led him to the ring, a man opened the gate for me, in we went as I was informed my instructor was on her way, looked up, the sky was its special Spring blue, though it’s too early for Spring, but tell that to the buds and blossoms and nest-building finches fluttering around the eaves of the stalls, fixed the stirrups to No. 7, clicked my guy around to the mounting block, put one foot in the stirrup, other leg in mid-air as it headed over Indy’s back when he bolted–partial rearing, followed by crazed bolt towards the rail, when I pulled the reins they were longer than my body and my thighs weren’t even in the saddle, I was already tilting back and I knew I didn’t stand a chance of getting any kind of a grip, I was going to fall, so I let go and in the brief time it took to hit the ring’s coarse sand, I thought: land between your shoulders, don’t land on your spine, you’re a mother, you’ve got to walk, land between your shoulders and WHAM, I was down and in my periphery I saw Indy still bolting to the far side of the ring and I heard myself gasp and I thought: you can’t lie here, get up before you seize up and I said, Can someone help me up, please? and a man said, No, stay still, don’t move, but I had to move and when he wouldn’t help me, I rolled to my hands and knees and the man said, Look at you, you’re Superwoman, I thought you broke your arm, but it wasn’t my arm, it was my back and getting my breath to fit between my shoulders and this was difficult, but then the man helped me, I think he helped me up and then he disappeared and the stable hands just stared at me from behind the fencing, terrified, they watched me place one hand on the rail and one hand on my hip and try to breathe and suddenly one of them passed me leading Indy and I shouted, WAIT, WAIT! and staggered to Indy and stroked him and soothed him and told him he was such a good boy, what a good boy, that it was okay, everything was okay and Indy’s head jerked and his ears twitched and he was still partly in spook-mode, but I was so glad I petted him, so glad I assured him he was fine before I lurched to the minivan and drove off while calling my husband and then I was in tears, not for me, not for the pain, but because Indy had had such a bad scare and I didn’t know why and they hate it when their riders fall, they’re so sensitive, and suddenly my husband was saying he was hanging up and then he called back with an Urgent Care location because my doctor was ‘booked’ and I drove to Urgent Care and limped inside and they said, Ah,  it’s you, we’ve been expecting you, and they put me in a room where I wept and wept and apologized for being a big baby and then they pulled up the back of my new gray collared riding shirt that I picked up in the men’s section at JC Penney’s and they said, Oh wow and the doc took a picture of my backside with his phone and showed it to me and most of my back looked like it had been ripped up by tiger claws, but I don’t remember getting dragged, just slamming down, but before I could comment on such weirdness, they shot me in the arm with something and cleaned me up and prescribed ibuprofen, and another pain killer, and a narcotic painkiller and an antibiotic and then my husband was at my side and he drove me to get xrays and when we got home he helped me into bed and said, Oh, I guess they padded your butt for you, but it wasn’t padding, it was an extra black and blue butt that had blossomed on what used to be my original butt, although I didn’t feel the pain because I’d taken the narcotic pain killer with the other painkiller thinking I was taking ibuprofen with the other painkiller as I was told I could do and suddenly I felt goooood, so good and lay down and now it’s Friday and the scratches are healing and we looked at the xrays with the doc and he pointed out: absolutely nothing wrong. You are lucky, he said. You could have been Christopher Reeve (yes, he did actually say that). You are lucky and I am lucky and our son is lucky, said my husband. Whether I ride another day with a clear conscience instead of feeling like an irresponsible mother remains to be seen. One thing I learned despite all the weeping I did? I’m stronger than I ever realized. Lucky. Stronger. Grateful.