Father/Son Dodgers Game!, the elementary school flyer stated, producing an amendment a week later: Due to unprecedented interest in attendance by moms, grandmothers, grandfathers and 3rd cousins twice removed, Father/Son is expanded to Family Dodgers Game! So we all went to the Kindergartner’s first baseball game and, because we were encouraged by the school to do so, and because we are a family of school spirit, we (purchased from the PTA and) wore bright red shirts depicting our son’s school’s name and name of the school’s mascot, CUBS. 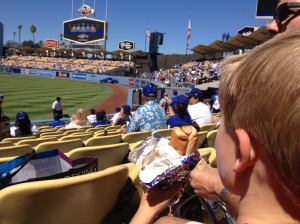 I tensed as we trekked across the Gobi-Parking-Lot. “What are the opposing team’s colors?” I asked my husband as another crowd dressed in blue ogled us three in our scathing reds. “I don’t know,” he answered. “Possibly red?”

“Do you get a discount if you show up in red shirts?” a man asked us as he hoofed by. “Ha!” I responded too loudly, but come on.

When you park a mile away from the stadium, it seems as if you will never reach its glorious Oval–but then it looms, shockingly, like Helms Deep. “Wow!” the Kindergartner said. “What the heck is that?” “The stadium,” I said as my husband barked, “Dodger Stadium!”, and I realized my spouse was way more excited than I had realized and, because it was about 2,000 degrees despite being the next to the last day of September, I wondered how sad he was going to feel when we left after possibly 10 minutes–unless, of course, our seats were in shade.

We took the escalator, only to be told at the top: “People? You’re down on the field.” I don’t know–the school purchased the block of seats. We just assumed… 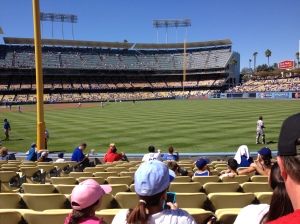 We utilized our Free Dodger Dog! tickets on the way down to the field, even though my son insisted he wasn’t hungry and my normal diet consists of nuts, berries and assorted lettuces and my husband is a vegetarian.

Even though my husband is a vegetarian and we are working on our 9th or so wedding anniversary, I asked him, after saturating 2 dogs in ketchup and tearing open the 3rd’s (presumably toxic) foil: “What do you want on your dog!” “Babe?” my husband responded. “I don’t eat meat.” I stared at him like he was a dangerous stranger.

Yeah. He ate that.

3 Dodger Dogs, 1 carton of popcorn, 2 Diet Cokes, 1 Lemondae, 1 Bag Of Chips and repeated NO’S to requests for cotton candy later (yes, that’s right), we found our seats. “These are fantastic!” my husband declared. “And hot,” I responded, but our son donned his baseball cap and began munching his Dodger Dog and we were so entranced by his cuteness and taking family pictures we didn’t notice the type of heat that makes one certain Global Warming is real. I cried at the National Anthem sung by an extremely talented chick introduced as some guy’s wife (WTH!), we met other red-shirted Cubs and by the 3rd inning I received a phonecall from my husband (I had departed our seats to people-watch from shade): “He’s ready to go.” 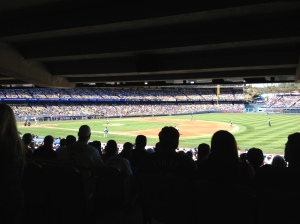 My husband was not disappointed. He was exuberant. We barely made it to the end of the 3rd inning, but so what? It was about a Cubling, not us. It was nice to see #66 after hearing his story on NPR and The Green Field was so very green and the players are indeed such fine athletes and the spirit in the stadium was felt and appreciated by us and no, I don’t watch it, I’m no convert, but baseball is good. Thank you, elementary school, even though you encouraged us to wear red.

And how great was it driving home with the A/C saturating the minivan. And how great were the sun-induced naps back at the Ponderosa: Right. On.

I’m sure there’s a poem in this. Perhaps in right field. (Or is it left? Arrrgh!)