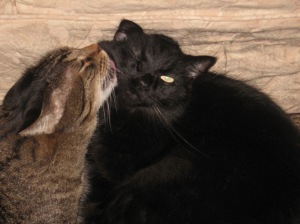 Al bathes Rudy. This happens a lot. Then someone throws up.

What greater gift than the love of a cat.

We returned to find the dummy comforter on our bed upchucked on, the real bedding beneath saved (mwahaha!), a puddle of cat pee under the slopsink in the laundry room (slopsink is next to kitty boxes filled with fresh sand), but no cat pee in the rest of our home, nor by the front door. We praised and petted them, gave them ample amounts of wet food and obliged their requests to go outside, only to have them all banging on the front door an hour later. I let them in. They stared at us, allowed us to scratch heads and rumps, then inspected beds, rooms, certain corners. Were they were surprised we were home so early? Had they expected us to be gone a hell of a lot longer, hence only a couple of defilements v peeing and gakking all over the whole house? Al curled up on the couch for an evening nap. Diggory clearly wanted to be in the backyard—I made this happen. Rudy drank from the bathroom faucet, then sat on the toilet’s closed lid, gazing at me through yellowy slits and purring. I left him to it. Husband and little boy passed out in the little boy’s room after storytime, I crawled into bed with The Known World. In the middle of the part near the beginning when Henry dies, Rudy appeared and meowed delicately. Hi, I said. Be with you in a sec. And then I heard a trickling sound. The dummy comforter was turning merrily in the dryer. Rudy was getting the good stuff. I was relieved my shriek did not wake up husband or son, but part of me ached to run into the yard, toss a swing in frustration and appeal to the sky like Richard Dreyfuss in Close Encounters, bellowing: WHAT IS IT WHAT IS IT WHAT IS IT. I plunked Rudy in the cat box, shoved  the comforter into the washer—cold cycle—and poured myself a glass of wine…Luckily there was leftover corn pudding in the fridge…