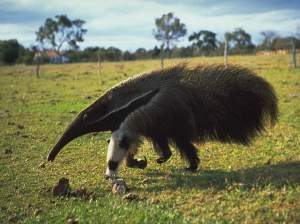 At the Santa Barbara Zoo, a fellow mother and I gazed at the anteater flicking its tongue at grass and slowly waving its unbrushed, showhorse-arched tail. Behind us, our 4 ½ year old boys practiced “Ninja” moves and tested their vocal chords.  A couple older than my friend and I, but not by so much, wandered past the anteater’s home. The man said: Jesus Christ. I don’t have anything against kids, but I’m really glad I’m through all that. The woman offered a brief, monosyllabic agreement.

The man was less than a foot from my head when he made his comment. The part of me used to people not holding doors or elevators for sleepless mothers managing strollers and wailing babies, used to people and their looks of disgust at public tantrums by little ones, used to cars in crowded parking lots honking at mothers for taking too long to belt their kids into carseats—a certain conditioned part of me so didn’t care about yet another stranger’s insensitive comment.

And yet—part of me wanted to take him down like a lioness presented with the great white hunter. I wanted to say:

Yo! You! Look at us! Moms with high-energy boys. We have not plunked them before TVs or video games. We have brought them here, where they are surrounded by glorious beasts as they practice Ninja moves in sunshine and breezes. You realize you and your lady friend are outnumbered by kids at this child’s paradise called the Santa Barbara Zoo? Screaming, excited children everywhere you look. Everywhere. Right? Okay. Know this, man: even when I’m 80 and visiting the Mars zoo with my grandchildren, watching them play and scream in the virtual animal pod playground, I will never say what you just did. This does not make me better than you. But it does make me less of a bonehead than you. At this moment.

Suddenly, the man was next to me. Either he was an inch from my shoulder because I had the best view of the most fascinating anteater in the world, or he was super-close-next-to-me because he was a pervert, or he was close because he knew I’d heard him and he felt something I will never pinpoint. Bottom line: he invaded my space, shrugging, sighing as he pondered the shuffling animal. And I held my ground in the manner of Mr. Bean, who thinks everyone is playing his game when no one is, ever, playing his game, they’re just being normal (human). I held my ground and I shook my head, too. But not at the man. And not at myself. I shook my head at the great anteater and her beautiful tail, her two foot long tongue, her ambling, unbrushed magnificence. I shook my head in awe.

And then my friend and I signaled our Ninjas.

And we moved on.