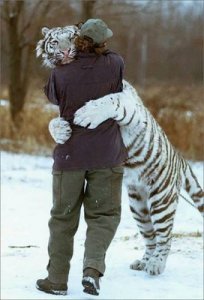 Because even then I didn’t have TV and iphones weren’t invented yet, I received the news via a phone call from my sister up in Santa Barbara. Shortly after speaking with her, as I sat alone in my little cocoon of Los Feliz apartment wondering what to do, my best friend and singing partner called and ordered me out to her house in the wilds of Altadena. So I packed up my cat and the little house finch I had recently saved from a pop-up sprinkler’s nasty clutches and drove not to work in downtown Los Angeles, but to the company of friends. At that point we weren’t sure if a plane was on its way to L.A. I was scared. I was perplexed. At red lights, I peered at people in the cars around me. Drivers were listening to their radios, their faces reflecting fear, their passengers sobbing. In Altadena, we gathered around the TV and drank wine in the morning and ate as if we were starving as we watched the towers go down again and again. Unreal, was our word that day. We waited for news from my best friend’s sister, whose husband worked in one of the towers. He made it out, but we didn’t know this for hours as he was busy hoofing it out of the city with hundreds of others. Don’t look back! He was told. Keep going! Don’t look back! When we got the good news, we whooped and danced, turned off the TV, prepared more food and finally sang our hearts out, songs my friend and I had been working on or performing around town. In the following days, as stories of rescues and heroics and community efforts came in through my stereo’s link to NPR, the shock continued, but now tears of compassion for people I never knew poured out of me. At work, poems were passed from office to office and shared via email across the university—poignant words for a dark time, words and images describing both terror and hope. One morning, as my boss and I walked across campus after a 9/11 tribute during which she’d read a poem to the gathered crowd, we came across two young male students sitting in lawn chairs. The sign next to them said “Free Hugs”. The second we stopped, they leapt to their feet and threw open their arms, huge, sincere smiles on their faces. It was one of the nicest, warmest, most comforting embraces I’ve ever been a part of. It filled me with gratefulness. And hope.